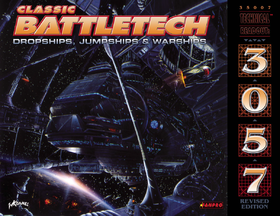 Go To Units In 3049, the first Clan forces appeared in the Inner Sphere. Armed with advanced technologies of a long-dead age, the warlike invaders unleashed a devastating blitzkrieg, capturing world after world until a Clan victory seemed certain. Unable to match the enemy's superior 'Mechs, the Inner Sphere militaries increasingly turned to their combat fleets for relief, only to find the skies filled with deadly Clan DropShips, JumpShips, and WarShips, massive vessels not seen in the Inner Sphere for hundreds of years. Now the Great Houses have begun to rebuild their own armadas and stand ready to challenge the Clan invasers in the infinite battlefield of space.

This revised edition of the original Technical Readout: 3057 contains descriptions, illustrations, and full AeroTech 2 statistics for the latest Inner Sphere and Clan DropsShips, JumpShips, WarShips, small craft, and space stations common in 3057. Additionally, this volume contains twenty-four WarShips mentioned in the fictional context of the BattleTech universe but never before presented in a technical readout.