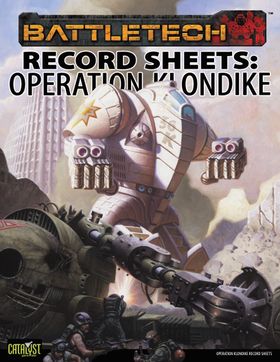 Go To Units In the wake of the Star League's collapse, Aleksandr Kerensky led the bulk of the SLDF into deep space to escape the inevitable Succession Wars. But war soon came to the "Star League in Exile" anyway, prompting General Kerensky's son Nicholas to form a new society, based on the principles of honor and strength. Fifteen years later, the newborn Clans were unleashed against those who abandoned Kerensky's vision.

Record Sheets: Operation Klondike is a companion volume to Historical: Operation Klondike, including more than 80 pre-filled record sheets of vehicles, 'Mechs and aerospace fighters mentioned in the Rules section of that sourcebook.