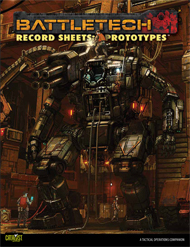 Go To Units More ‘Mechs for the Battlefield

You’ve grasped the tactics involved with the additional units and weapons from Tactical Operations to defeat your opponents. Now you own Technical Readout: Prototypes and want to deploy some of those ’Mechs, vehicles, and battle armor on your gaming table. Grab your dice and start rolling, because these sheets are for you!

Record Sheets: Prototypes contains 30 pre-printed ’Mech record sheets that will have players firing autocannons, missiles and PPCs at each other in no time. More than 60 additional record sheets—from vehicles to battle armor, ProtoMechs to aerospace fighters and DropShips—bring the excitement of combined-arms game play to any table top. Two ready to-play scenarios focus on the highlights of this volume, while an extensive Rules Addendum section, including Design Quirks, provides a sneak peek of all the advanced rules options provided in Strategic Operations.

Note: This is a PDF of the print Record Sheet book.