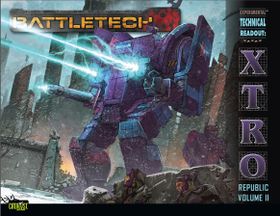 Go To Units The year is 3136. Just when it seemed certain that the Republic of the Sphere had led the Inner Sphere to a true era of peace, all hopes lie in ruins. Communications have broken down, separatist factions run amok on defenseless worlds, the Great Houses are saber-rattling like in the worst of times, and the Clans are once more on the prowl. Withering in the chaos, much of the Republic has fallen back behind the inscrutable barrier known as Fortress Republic, while its severed Remnant scrambles for its very survival. Bereft of their central authority, the surviving warriors of the RAF face uncertain times, surrounded now by enemies whose war machines have caught up with the technological leaps of the past decade.

Experimental Technical Readout: Republic II samples production and custom machines that have appeared in the BattleTech universe by the early decades of the thirty-second century. Each unit featured in this book incorporates some of the new technologies that debuted in Tactical Operations--now employed by the armed forces of the Republic of the Sphere and its contemporaries. Statistics and Record Sheets are included for 13 new advanced and experimental BattleMechs, vehicles, and aerospace and battle armor units, ready for play in BattleTech games up to the year 3136.