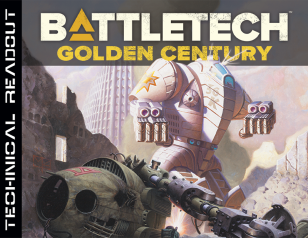 Go To Units "Those who break faith with the Unity shall go down to darkness."

While the Great Houses of the Inner Sphere decimated each other over the shattered remains of the Star League and slid into the technological dark age of the Succession Wars, the Clans of Kerensky entered into a golden era of prosperity. Bereft of Nicholas Kerensky’s leadership, the Clans pushed their technological capabilities to their limits, developing devastating new weapons and technologies and flooding the battlefields of the Pentagon and Kerensky Cluster with powerful war machines as they trialed each other for supremacy.

Technical Readout: Golden Century unveils the weapons and technologies developed during a pivotal era in Clan history, when the Clans came of age and matured into what they are today. Technical Readout: Golden Century debuts the production and custom machines used by the Children of Kerensky in the early twenty-ninth and thirtieth centuries. Statistics and Record Sheets are included for 29 new advanced and experimental BattleMechs, OmniMechs, vehicles, aerospace, battle armor and WarShip units ready for play. In addition, a complete section covers the experimental designs introduced by the nascent Clans immediately following the Pentagon campaign.

Buy the PDF and print on demand book at DriveThruRPG